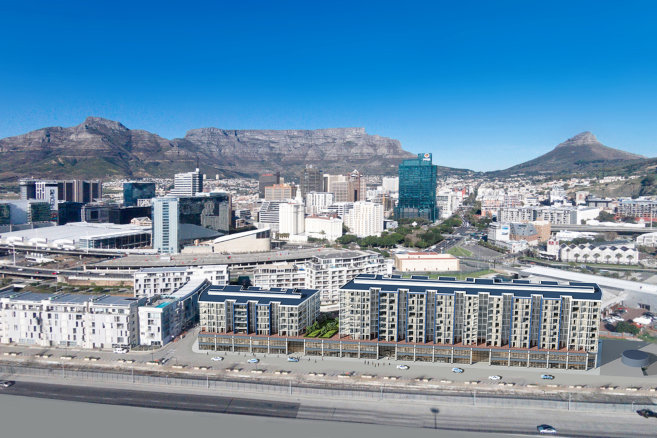 The City of Cape Town has officially approved the Harbour Arch mixed-use development after years of delay.

The parcel of foreshore land, spanning 5.3 hectares, was previously owned by Transnet but has since been bought by Amdec for its R14-billion mixed-use development. “Within the context of the burgeoning Cape Town CBD, Harbour Arch occupies a strategic position at the convergence of major access roads, with easy entry points to and from the N1 and N2 highways,” Amdec said. “It is set to be built on a 5.8-hectare site, with 198,000m2 of usable space and six individual towers. “The site will also be home to two new hotels, to be operated by Marriott International, long-standing partners of the Amdec Group and the world’s largest hospitality group.

Amdec said that the development represents a massive private sector investment into the city, and is estimated to create at least 13,000 construction jobs.

In addition to new job opportunities, the project will also boost investor confidence both locally and abroad and bolster the city’s economy, the group said. “Harbour Arch will create a world-class New Urban precinct, delivering multiple lifestyle benefits and creating a highly sought-after place to live, work and relax for residents and visitors to Cape Town. “It will further entrench its position as one of the world’s great cities, regularly voted one of the most desirable places to visit and live.”

The developer of Johannesburg’s Melrose Arch says it will develop affordable housing in the southern suburb of Ottery to give back to the city.

Amdec, the developer of high-end properties, has announced an affordable housing scheme in Cape Town. The group will develop Golden Grove Estate in Ottery at a cost of R500m.

“SA is suffering a severe backlog in the provision of affordable housing, especially for lower income-earners. In the Western Cape alone, the housing backlog currently exceeds half a million, with more than 300,000 of these in the city of Cape Town,” Amdec CEO James Wilson said.

As a result, Amdec will develop Golden Grove Estate on land that previously housed a poultry farm.

The 11ha site will accommodate 1,000 affordable residential apartments, along with a convenience retail centre, communal gardens, children’s playgrounds, a creche and daycare facilities, five-a-side soccer pitches, basketball courts, and a communal recreational clubhouse for all of the residents.

Amdec has become known for developing high-end, multi-use properties such as Melrose Arch, and the recently announced Harbour Arch precinct in Cape Town. Amdec now wants to develop at least one affordable residential unit for each luxury unit it develops, Wilson said.

Golden Grove Estate will largely cater for rental tenants but some investors might buy units for future rentals.