Play Video
Tap to select the previous period
Next

Situated along Sable Road, the building contributes to the public face of the Bridgeways precinct, facing Cape Town CBD and Table Mountain. Located on the eastern corner of Bridgeways precinct, the building is well connected to Century City square, Convention Centre and near the attractive canal network that runs through the precinct. Future tenants can easily access and benefit not only from the amenities within the Bridgeways Precinct, but also from the shops, bars, restaurants and hotels located across Century Boulevard. Rising five floors above two basement parking levels, Sable Corner continues along Sable Road, maximising its exposure and ensuring its inhabitants of uninterrupted views towards Table Mountain and the city. Enjoying the advantages of Bridgeway Precinct, Sable Corner is within walking distance of the exceptional Century City Conference Centre, Century City Hotel and Century Square where restaurants and coffee shops spill out onto an open landscaped area, with Virgin Active and Axis apartments a few steps away, completing the live-work-play vision of Century City. 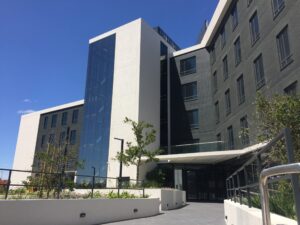 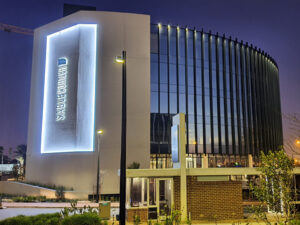 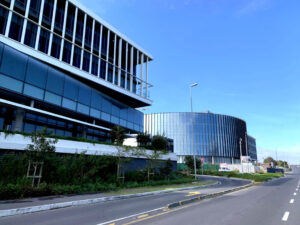 Let us call you back

Following the success of Sable Park, which is fully let and has been awarded a 5-star Green Rating, Rabie Property Group has broken ground on Sable Corner, adding another premier office address in the flourishing Bridgeways Precinct. The first of Sable Park’s two buildings houses Discovery, who relocated from within Century City. MTN will soon occupy the majority of the second building, taking up just under 4 000 square metres on the ground and first floors, also extending their tenure within Century City. The balance of the building has been let to ICLEI, Byte Orbit, Sasfin and TAL. Designed by dhk Architects, Sable Corner will feature a curved façade facing Sable Road, with some design elements, such as its vertical fins, drawing parallels with it’s neighbour Sable Park.

Rising five floors above two basement parking levels, Sable Corner continues along Sable Road, maximising its exposure and ensuring its inhabitants of uninterrupted views towards Table Mountain and the city. The ground floor – ideally suited for showroom space – will experience views linking directly with a landscaped border between the building and Sable Road. The main entrance lobby is on the opposite side, opening onto the visitors’ parking. Views towards the northeast will, in time, include the redeveloped Ratanga Junction, which will retain a strong focus on water and soft landscaping. Enjoying the advantages of Bridgeway Precinct, Sable Corner is within walking distance of the exceptional Century City Conference Centre, Century City Hotel and Century Square where restaurants and coffee shops spill out onto an open landscaped area, with Virgin Active and Axis apartments a few steps away, completing the live-work-play vision of Century City.

Linking the city with decentralised suburban areas, Century City has become the preferred home for many corporate Head Quarters and Sable Corner is ideally designed for this purpose, with an overall lettable area of approximately 6 500 square metres of prime grade office space. Sable Corner’s ground to third floors range from 900 square metres to 1 500 square metres, with a roof deck offering an executive entertainment opportunity or spectacular function area. A fully glazed circulation staircase and lift lobby will link the convex shaped section of the building to a rectangular appendix, allowing for economical office design without compromising on the wow factor or the future-focused design elements unique to the building. Sable Corner will have ample parking in its two basements, with additional parking available within easy walking distance.

A total of 6 868 sqm of prime space available. Ground to fourth floors range in size from 900 to 1 500 sqm Roof deck offering an executive entertainment opportunity or function area Naming rights for single tenant Designed to achieve a 5-Star Green Star rating by the GBCSA Monthly rental: R230 per square metre per month Ample parking in two parking basements Parking allowance: three bays per 100 sqm Additional parking available within easy walking distance. Sable Corner is situated along the main Sable Road entering straight into Century City, right off from the N1 Freeway and contributes to the public face of the Bridgeways Precinct. The Sable Corner Commercial Office Building is located on the eastern side of the Bridgeways Precinct and is well connected to Century City Square with various amenities, bars, restaurants, and coffee shops such as Tiger’s Milk, La Parada, Seattle Coffee Co. to name a few. It is also highly visible from the N1 highway. Other amenities in the vicinity and within walking distance from the Sable Corner building features the Virgin Active Gym, Canal Walk Mall, Crystal Towers Hotels and other B&B’s, the Colosseum Hotel and Conference Centre, Century City Hotels and Conference Centre, Public Transport (bus, taxi, and train stations) as well as the MyCiti bus. The building is also within a two-minute drive to the N1 highway making access to the building convenient and quick. Sable Corner has a unique design with glazed apex windows which are floor to ceiling height boasting great energy into the building with lots of natural light and extraordinary and uninterrupted views of Table Mountain, Lion’s Head, and the Atlantic Seaboard. The building has been designed to achieve a 5-Star Green Building rating which will ultimately lower and save on the overall running costs of the building such as your Water and Electricity consumption. A Backup Generator has been installed and the building has 3 elevators with access to all 5 levels of the building, plus two basement parking levels. The Sable Corner building has an average parking ratio of 3 parking bays per 100m2 and additional parking can be rented at the nearby structured parking buildings across the road. Possible signage is available or building naming rights for a single-use tenant.

We have been helping businesses to find their perfect space in Cape Town since 2013. Our team of property professionals are ready to find your perfect space. We have a longstanding relationship with the top property funds and property management companies in the city. We feature properties from Cape Town’s most exclusive, vibrant and desirable commercial locations, Cape Space Properties offer a premium property portfolio that showcases the very best A Grade Commercial Space Cape Town has to offer. Independent and delivered at no-cost to clients, our service assists hundreds of businesses like yours each month to search, select and secure the right office and warehouse solution for their business. Delivered as part of a fully consultative service, our team can streamline the office search process from beginning to end. So whether you are looking for Office Space in the City Bowl, Green Point, Southern Suburbs, Tygervalley or Century City, our knowledgeable team of commercial property brokers can use their unrivaled knowledge of the local property market to guide your office or industrial search. Cape Space provides access to the definitive portfolio of Premium Commercial Office and Industrial space available in Cape Town and surrounding suburbs, streamlining the process of conducting an office search. Moving to a new office or just revamping your current space, we will get you up to three independent quotations, saving you time and money.